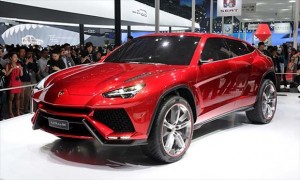 To me, this is so wrong, I’ve been a big fan of the original Lamborghini car, but this, SUV? ewww I don’t like it, making me not liking this machine anymore, anyhow, realistically I think Lamborghini should be always be a car, not a truck, that just wrong.

Named after an extinct wild breed of cattle, this brutish bovine’s exterior has all the knife-edged drama you’d expect from the company that builds the Gallardo and Aventador supercars. With approximately 600 bhp and all-wheel drive, the Urus should have the handling and straightline performance to match the world’s finest sports cars. For the moment, Lamborghini has not confirmed which engine will power the Urus — it could be a derivative of the V-10 found in the Gallardo. Beneath the wild body is the same platform that will underpin the next Porsche Cayenne, Audi Q7 and VW Touareg — Bentley is also planning to spin an SUV off this same platform. Lamborghini expects to sell 3,000 examples of the Urus annually, or more than double the 1602 vehicles it sold in 2011. Sales should begin within the next 3-4 years, and the base price will likely top $200,000.