As I expect, the pop pop pop … Bitcoin miner computer shut down was due to a blown power supply. The power supply rated for 650 watts, it has 2 (2×6) connectors that I can connect two video cards to it, the two GPU were 7970 XFX Radeon Black Edition. Well? each on pull about 200 watts load full load I think, it could go up to 270 watts each.

The good thing about this are: It didn’t damage my mother board or other equipment and accessories connected to it, still work!. Another good thing is it didn’t catch on fire and burn down my house. So overall I would say power supply probably safe, your computer is safe, it will not catch on fire easily due to failure, I think it has protection when overload or overheat to blow the circuit breaker or protection like blowing a fuse which cut off the power completely. 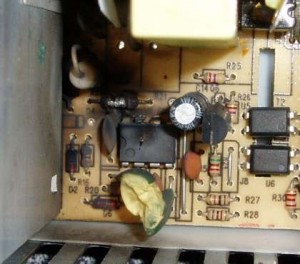