As I mentioned many times on previous blog entries, BTC Bitcoin level of difficulty increase dramatically, for many miner it’s no surprise because the actual hardware for mining has been shipped and will continue to ship. Further more, on top of that, more Bitcoin Asic manufacturers are aiming for a much higher hashing power than what today being offered by Butterfly lab (BFL) or or similar manufacturer, forget about mining Bitcoin with USB eruptor tha mine at 300mh/s per piece it’s nothing compare to Butterfly Lab Jalapenos which had been shipped and aiming to complete all backlog by September this year 2013.

If you haven’t quit GPU mining yet, I don’t know why, but it’s clearly GPU mining no longer profitable, you would be loosing money big time paying for electricity, for those that get free electricity, as I mention it’s better be small amount, otherwise someone will find out and you will be in bigger trouble.

Don’t get me wrong, I think Bitcoin mining is still profitable doable if you have the right equipment and certainly not GPU, not USB eruptor, not FPGA, you got to have at least an ASIC machine to do so at minimum of 5-7GH/s which being sold and still one going shipped by BFL Butterfly Lab. Then invest some of your profit for future Bitcoin machine such as the one from KNCMiner.com which is cheaper than Butterfly Lab (BFL) which will ship in September also look like it, worst end of this year. So, how to play this game is use Bitcoin mining machine, and invest some of the profit for more better Bitcoin mining machine, get update and try to be the first to order these equipment so that you can get it first profit more, the last to get these machine will mine the least 🙂 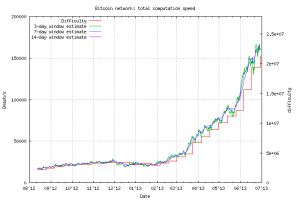