Quick fix: Check the CPU or EPU label power cable cable connector, is it connected properly? that’s the cable that power the CPU.

A friend have a new computer assembled, customized, purchased parts from Newegg.com So he assembled everything based on youtube guide and the manual of the motherboard also. He got assembled and tried to boot it up, no beep, cpu fan spinning so we know power is there, no post beep of any kind. The weird thing is the GPU (video card) fan does not run, didn’t even move like no power was provided into it.

I checked all the possibilities, including removing all the hardware components, like HDD, CD/DVDROM, RAM, GPU, cables and so on. Tested all the components on another computer and it’s all good. So it has to be the motherboard, turns out it is. The problem was the PSU CPU power did not connect to the motherboard CPU connector, so no power was provided to the CPU for the computer to boot. Strange that the motherboard don’t gives any beep post beep error sound or anything like that saying the CPU isn’t working.

Especially if you have AMD hardware motherboard and CPU, and your new computer just assembled didn’t boot, check your CPU power cable, ensure it’s tightly fastened, clicked when you plug it in. The CPU power connector power from the PSU cable can be split to 2, meaning as shown below, you can split it to 4×4, and the 4×4, if you have a mini ITX motherboard that is. 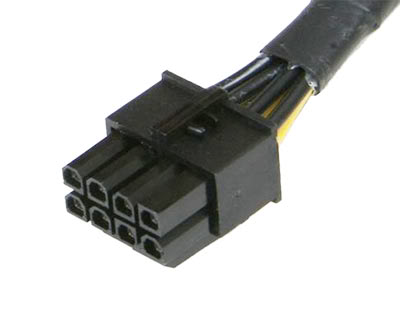