No surprise to many people, what coingeneration.com DigitalGeneration DG said previously within 24 hours will update users and fund paxum and ego pay and other processors account didn’t happen. This has been ongoing, whatever updated on members homepage or blog, it did happened, Coingeneration.com DigitalGeneration DG has been making up stories, say one thing and did something else, never really follow through on what they do or said or planned to do. Come to no surprise for older members that has been with DG for a year or so, or for members whom spent thousands of dollars for threads and didn’t get paid or payment didn’t even equal to the cost of investment. So let say if you invested $1000, up to day 5 months ago, you would probably only receive $500 or less or a little more, then it stopped working making payment for you and nothing you can do about it, because you cannot dispute due to the fact that it has been over 30 days most payment processors will not allow dispute even paypal if it’s over 30 days, this is the same with other processors if they even allow dispute. This is the game coingeneration.com play now a day you can never get your money back. It’s gone forever! Especially now they use paypal for incoming meaning you buy threads for 30 days, and yeah you will get paid for 30 days and then after that which is beyond 30 days period where paypal will no longer allow you to do dispute to get your money back and so you’re screwed, meaning coingeneration.com DigitalGeneration can stop making payout to you and all you can do is whine and complaint, but none of their staff will pay attention and don’t care, and guess what? nothing else you can do other than contacting the POLICE or FBI but they will not take action unless its in certain amount of millions dollars. So again think about it, that is how currently many users members of coingeneration.com DigitalGeneration DG long time members understood the game planned, new users will always fall for this and when they realized it their money is gone and they only have partial investment back. $50 for 30 days, the most you will ever get paid is $30, the other $20 you will never see it, and forget about $50 one year threads you will be in the same boat as other members whom purchased threads months ago never get paid or paid in pending status or payment didn’t even equal to the amount invested. So do the math, $50 you only get $30 back, and you loose $20 and multiply that by thousands of members how much money they make? and nothing anyone can about $20 out of the $50 per threads (100 threads that cost you $5000, the most you will ever get back is $3000 if you’re lucky, the other $2000 gone with the wind), it’s gone you cannot dispute.  I’m not saying this is ponzi scheme or scam or fraud but you must research it and understand it and determine for yourself, you will in for a big surprise what will happen to your hard earned income invest in something like this. Stay tuned! The next update might be the last, coingeneration.com no longer exist on the internet. 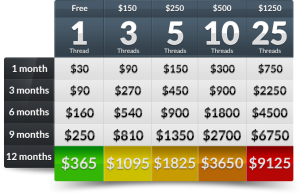 the truth and facts about coingeneration.com DigitalGeneration DG scam or not read it and determine for yourself