So you have a computer that you share files to your home workgroup, you know that you configured everything correctly and simple, shouldn’t be hard right? but somehow one of your computer couldn’t access, and you have tried everything, diagnose and so on. What’s the problem? 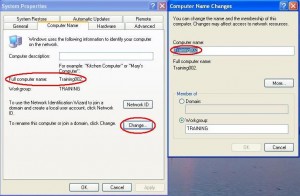 same computer name on the network causing issue how to change