how to block Buyers with Unpaid Item strikes

Lately there has been reported all over the web about a user on ebay account “youriphonespecialist” account was created on October 31st 2012, and each day this user bid and won many iphone especially iphone 4 and iphone 4s, I believe the user method is to maximum bid during the last few minutes auction ending, letting the system doing the bidding for him or her, but the ration of the user pay for the item is very low, meaning that most sellers will never get paid and have to endure ebay policy, allow users 3-5days to make payment, if buyer don’t pay, you can report to ebay which takes another 3-5 days before ebay refund you and allow you to re-list and sell again, so you’re loosing money and time and ebay is in the favor of this user “youriphonespecialist” because he/she also reported back to ebay if someone gave feedback as negative but a positive feedback was use, make me think this buyer has a big team of people even lawyers working for him/her using ebay policy against other ebay sellers against ebay.

However there are a handful of sellers lucky enough that eventually this buyer “youriphonespecialist” make payment, but take very long time, those seller are lucky or maybe because the buyer see a good price and decide to pay, if not he/she just ignore. I’m pretty sure ebay gotten a lot of “report this user” but ebay couldn’t suspend his account due to the fact the he/she bid and doesn’t pay, I don’t think there’s a policy ebay would suspend an account for bid win and doesn’t pay, however if enough people report then ebay would probably do something but maybe “youriphonespecialist” has lawyers on their side working checking ebay policy and try to find loopholes and go around it.

So bottom line, please block these users, block ebay users that have more than 2 unpaid items reported to protect yourself, you can do this by visiting this link below.

how to block Buyers with Unpaid Item strikes

Now if you get upset because he/she didn’t pay, which you have the right to get upset, but watch out for policy violation, such as, you gave him/her a Feedback comments negative but the feedback was positive because you cannot change the feedback to negative since you’re a seller. Or the feedback was given before the buyer time to pay expired. I know many sellers are upset and willing to hunt this ebay buyer youriphonespecialist down and take appropriate action could be revenge murder LOL I don’t know, but it’s easy, you can view his/her address by clicking on “Print Shipping label” the address of the user is right there LOL, so there you go, you can google map the address it will show you where this ebay buyer “youriphonespecialist” live 🙂 I can tell you guys it’s not worth it to do anything, just block buyer with more than 2 unpaid item strike, then you’re good, you won’t encounter this kind of scum bag!
Another thing is, so now ebay is deleting your feedback comments, because ebay user “youriphonespecialist” reported you violate ebay policy, and it’s true that’s why ebay deleted your comments. Make you wonder, so ebay take fast action on you, but so far nothing is being done to suspend this user “youriphonespecialist”? I wonder too, maybe he/she smart as I say has lawyers or someone doing the research to find loopholes preventing ebay from taking any action at all. Ebay sucks sometime!
Since many negative comments feedback has been deleted by ebay, below is a video I found with snapshot for you to see LOL, stay away from this buyer people.
http://www.youtube.com/watch?v=0mtum3gKK_U 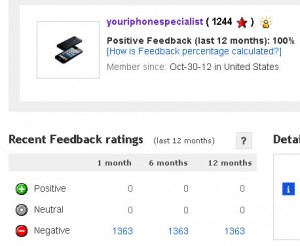 the real ebay feedback as buyer for user youriphonespecialist