I don’t know about this, so we have the Wii and then Wii U and then now Wii mini. OK what’s up with the Wii mini? well it doesn’t have wifi, which I don’t know why we need wifi for internet? would you surf the internet on a a tiny screen that does have a proper keyboard or mouse? I had a hard time already using actual Wii console navigate through the web browser selecting each letter, ouch! what a waste of time. So maybe the Wii mini is a good idea, no internet wifi, then the question would be, why not get NDS instead? well there are differences but not much I guess, I bigger screen and better quality graphics perhaps. The thing is the Wii mini going to hit Canada first, so if you want one, you can order one on ebay from a canadian sellers 🙂 LOL, it hit Canadian beginning of December then I think the rest of the world during or before Christmas, I honestly don’t think this Wii mini will be a big seller, however it only cost $99, so maybe it will, but again it has no wifi 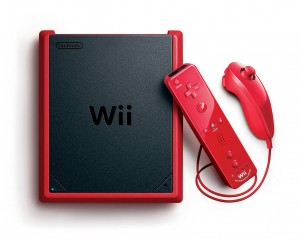 get a wii mini today from canada first decemeber 2012 $99

Watch reviews of the Wii mini on youtubes.