Here’s another example and it’s fact, Lance Armstrong doping, although the drug enhancement he’s using was never detected somehow, so I guess it’s legal, if not it would have been detected and his career would have end earlier than now. So who’s next to Lance Armstrong? does that person dope also? anyhow, this is just another proof, celebrity don’t last, you found any celebrity as popular as Lance Armstrong last for a long time forever, I would love to hear about it. 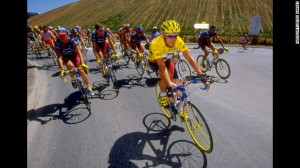