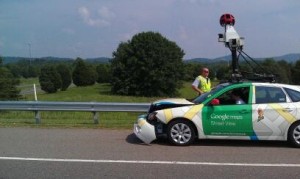 Well by now I think a lot of people might have already know about google street view or google map also google earth. Have you seen it in action out on the street taking pictures or filming the street? Yeah some of you might have, it’s kind of rare but chances are if you’re on the road a lot you might see it. They hire people like you and I, contract to their company driving around taking photos filming all day all night covering every inches of the street, still work in progress, a lot to cover, and yeah they have very high budget to do this.Some of the photos taken include drunk people, fighting, homeless sleeping on the street, car accident, even violent taken place. The most interesting picture is its car getting into a crash car accident.