Just finished watching both Giong Hat Viet (The Voice) 7 and 8, 8 was the latest one earlier today well in Vietnam was Sunday night was when it broadcast, someone recorded it and immediately published onto youtube and I found it  🙂 hmm I wonder if watching is illegal, probably not for this Vietnamese show air in Vietnam, it’s free any ways. I think VTV3 is awesome, I don’t know what’s other Vietnamese channel have but VTV3 is awesome, well at least the one that I want to watch  that is, which is non politics related, no commercial or news about Vietnam, simply quality entertainment no commercial at all 🙂 Anyhow, Giong Hat Viet The Voice is better I like #8 especially the one from Tran Lap the blind guy and the other pro singer, they both very good, but was no surprise Tran Lap did not pick the blind guy. Watch full length below, broad to you by youtube and someone from vietnam took the time to record it and put it on youtube 🙂 or probably someone not from Vietnam but use satellite to record the show lol! 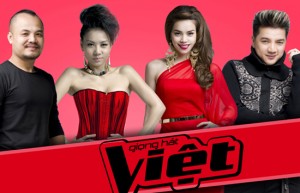