So the question. Does it work? Based on my research, via google search and youtube video. It appears to work, or I can also say safe to say, it does work. Wind Turbine, Solar Power, any power source that can hook up to the grid tie inverter terminal that produce electricity will work. The service electrical panel meter from your municipal power or power company will reverse, that’s right! the power meter will go backward. So let say you can source power from solar panel 200watts, that’s 200watts, and if consistently generated, it will push your meter backward 200 watts, not a lot, but it work, and if you have a lot of power sources to the inverter, you will see the meter go backward thus reducing your electric bill.

Second question, Is it worth it? to me NO! because the inverter cost money, the power sources from solar power, wind turbine, whatever cost additional money to get it, and off course the installation accessories as well. So today, it might not be cost effective, but maybe in the future the solar panels or wind turbine cost will get lowered or the power company increased electric bill per kilowatts then it’s worth it to buy the inverter and related equipment. 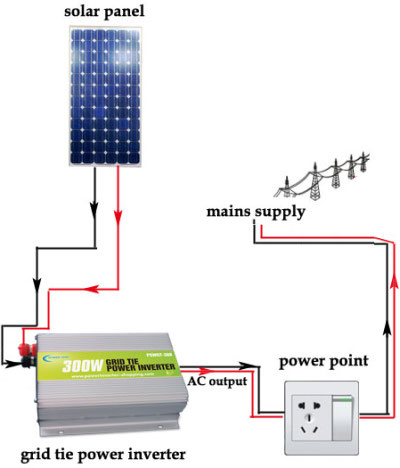 One more thing I would like to mention also is, some people even tried or say that they can use original power to make more power and put the additional power back to the source and have extra for usage. Let me put it this way. You have a motor generator that can generate 100 watts of power. The other motor need 90 watts of power to spin, so you think you can trigger it and it start and turned the the other motor generator which produces 100 watts, so you wired that 100 watts to the 90watts motor and expect it to continue to work and you have 10 watts for other use right? WRONG! no such thing as free lunch, don’t believe this concept. It does not work. At least not as efficient as you may expect. Lots of liars! you can check it out here https://www.youtube.com/results?search_query=motor+generator+power+itself