I’m sure many people have this question “HDTV LED LCD monitor can be use as a computer monitor?” Because the TV monitor screen is big, wouldn’t it be nice to have a computer monitor that big? NO! and sometime yes. I personally tried many HDTV LED LCD TV monitor as computer monitor and didn’t work too well, for instant hook up my Samsung 52 inch, I noticed the video card supported it HDMI DVI but the resolution cannot be change to higher resolution, basically you loose resolution, making the fonts hard to read but the pictures are amazingly sharp.

I believe that you can use 1080i or 1080o TV monitor up to maybe 32 inches sitting in front of it or you looking at it all the time is fine, but bigger than that you will notice it’s not a computer monitor, I think you will get something like eye strain. Beside, the TV monitor most cost more on electric bill and produce more heat than a computer monitor. Here are comments from other:

HDTVs can be used as a substitute PC monitor.

The only issue is that text will not be as sharp as on a PC monitor. I have not seen a zoomed picture of the LCD or plasma pixel structure, but from what I’ve read, the pixel structure of HDTVs are geared more towards shapes than text.

That’s not to say text will be bad, just not as sharp as on a PC monitor even if you were to stand / sit far away from it enough where the relative size of the HDTV will appear to be the same size as sitting next to a PC monitor.

Pixel pitch (distance between pixels) counts at lot towards sharpness so the larger the screen size of a HDTV, the higher the pixel pitch the less sharp text can be. Therefore the suggested 42″ HDTV is a good size. 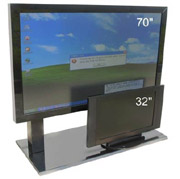 HDTV LED LCD TV use as a computer monitor what’s the side effect and impact can it be done?