That’s right ladies and gentlemen, you can now voice chat on your iphone IOS devices through facebook app, this app will let you voice chat in addition to the traditional instant message to your facebook friends buddies whoever and yes video also. No surprise, but it’s official now, starting Canada first, so if you’re in Canada you can download the facebook app that allow you to voice audio talk to your buddies friends facebook for free anywhere, anytime, well with internet that is.

I think this is a great app, and I will not be surprise if Android developer have something like this already, just not officially released yet, and normally they don’t announce due to development stage. I wonder why is it Canada gets to test it out first? is it because it’s a less technology laws to test as guinea pig before launching to USA? probably! but I want to test it too! well you can, I don’t see a reason why you cannot, even you live in the US 🙂 just proxy with Canadian IP # 🙂 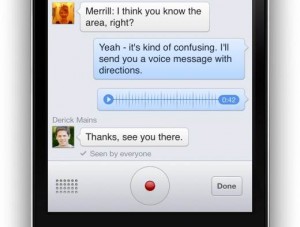