Again happy Thanksgiving, Black Friday officially started an hour ago for many retailers stores nation wide. I targeted the XBOX 360 Kinect with 2 free games, awesome! I got it at Target. I started driving around 845pm arrived at Target 9PM, saw long line, and I mean very very long line, luckily it was organized, 1 COP car in the parking lot, and 1 COP car park in the front entrance and exit, I don’t know why they’re there because it was so organized, everyone were nice to each other, no pushing, no fighting, at least I don’t see it. So I was in line as well, and within 5 minutes I entered the store and got to the back label as C where the XBOX 360 Kinect are and there were about less than a dozen left, so I can say I was one of the lucky one LOL 🙂 then I walk out to the cashier, it was a quick transaction, I can say that it took me less than 10 minutes from the time I arrived at the parking lot go inside the store and out. It was a breeze. I think that if you organize, if you know what you want and where it is in the store, it should be real fast! anyhow I’m safe home now blogging this, and got my XBOX 360 Kinect awesome deal, although you can get one online at Microsoft for also $199 but I hate the shipping time and sometime they charge for shipping. 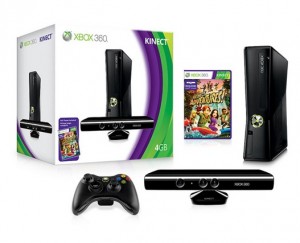