OK so this might not be funny, but I really like it, the criminals whom got arrested for raping a 29 years old shows up on India newspaper which also shows up on international news TV due the outcries of also another happened last December where a medical student was raped to death.

In this latest rape case, the criminals arrested were chain like a dog, hand wrist chained with chain held by the India police officer, I guess prevent them from running, I find it amusing, and off course also what criminal should be treated as. Raping is a terrible horrible thing, I would agree with most victim’s family members that the one whom did the crime should get hanged, in some case the public said to cut off the criminal penis and let him bleed to death, an eye for an eye, that is nasty though, many people would not agree to taken revenge but to make things better, prevent it from happening again some how. 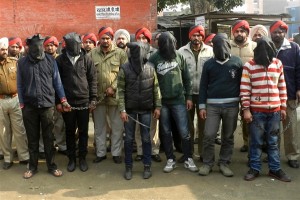