The man received his 22 gold medal today, if you’re wondering how much does each gold metal gold cost? average about $500 USD or so. However it’s not about the gold in the gold metal, it’s his accomplishments last year and this year 2012 in London Olympics. I didn’t like much sport or not at all, but I really got a chance to watch off and on, all of the matches were very interesting, it’s the world competition not one team in a country compete with another team within the same country, maybe I should redefine I don’t like sport, should I elaborate I like sports when the world compete against each other, not within the country, so let say when NBA laker play with the jet or something, I have no interest, it doesn’t appeals to me as interesting at all to watch 🙂 weird huh! oh well. Congratulation again to Mr. Phelps, you make us American USA proud, I thought the Chinese will dominant in many sports but apparentally not! that’s a good thing LOL. 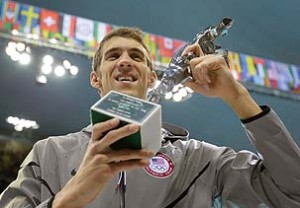