OK people, stop watching Jackie Chan movies, if you have it on the shelves, on your computer, poster, collections, autograph, whatever… get rid of it, ebay, auction it craigslist it … Why? because it’s been confirmed, Jackie Chan appeared on Chinese national TV and his remarks toward Americas were we’re a corrupted country, US and its people are corrupted! what do you thing about that?

Before this, I used to love Jacki Chan movies, now no more because of this remarks from him. I think Jackie Chan is now a communist, will say and do anything for his Chinese communist country. Did Jackie Chan even watched the world news? what Chinese government are doing in he South China sea? You’re ignorant stupid fool Jackie Chan, you just a fan and I’m sure many other American fan as well if they know the real you. You are a communist, if you even understand what the word communist mean? 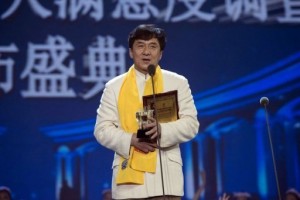