Well somewhere in the world it’s already been 12/21/2012 anything happened? not here and I haven’t heard anything different happened yet other than people are going to there day to day business. What really disturbed me is that I just a heard a news in China, Christian people in China pray before the world end 12/21/12 ask for forgiveness of everyone did something wrong and save the world, does it work? I guess it did, but guess what? those one thousand people or so believe in the 12/21/12 got sent to jail for gossiping 12/21/12 end of the world, it disturbed me because these people are Christian and possibly Catholic, I am a catholic and a true catholic don’t believe in those things, why those christian have to believe in this in China. 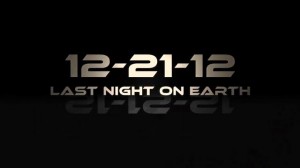 last night on earth 12/21/12 tomorrow what will happen will we still be here and alive?

Not only in China I don’t think, I’m sure from other part of the world as well, that they believe in this stuff, Mayan calendar end, the world end, my arse! Well I guess a little bit too soon to say? it’s only 9PM here LOL. Let me check the news to see if anything happened? CNN – nothing, MSNBC – nothing, FOX – nothing, Reuteur – nothing, local news – nothing, come on now people, if you believe in the world ending based on Mayan calendar, voodoo, superstitious and stuff like that, it’s crap! wake up!, be real, ignorant fool.