Just woke up and saw interesting news on TV, I went to NASA website and get some more information. Watch out, there will be some news media exaggerate this findings as “life found on mars confirmed” so watch out, go directly to NASA website and read about it. So what’s what is this about?, according to NASA.gov website, the first rock examined by NASA Mars Rover it has same chemical composite as it is here in on Earth’s rock, furthermore they found same trace of existing previously organic attached to the rock, this rock is about the size of a foot ball, look triangular shape. To me this is exciting news, as Rover move along I wonder if we can confirm this. The Rover landed earlier this year or late last year, it landed on the spot where scientist all agree that there was once a river flow through there, so it’s the best spot to land and inspect the history of that area. Anyhow, great findings, best wishes to the NASA to find more and possible life still exist now and I hope that I see people live on Mars before I died 🙂 by natural cause that is LOL 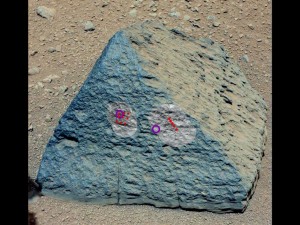 Mars Rover found more rocks but this time being inspected by latest on board instrument confirmed same rocks found on earth and this rock evidence of organic fossils?

See reactions from people around the world on this from youtubes.