Just in case you missed, the manufacture of Twinkies or its company has declared bankruptcy however it’s not official but like many companies declared bankruptcy but it was just for protection so other financial companies cannot force them to make debt payments. I did hear that as of 11/20 it’s in court and official, but again just for protection, other similar manufacture might buy them out. I gotta admit, Twinkies tastes really good sweet and creamy, but guess what? eating too much can hurt your stomach, eating too much can be had for your weight and health due to the sugar, but I know many fat people are healthy, it just they have good genes and they’re destroying it for later generation, bad!. I don’t want any US companies to go bankrupt, when bankruptcy occurred, people looses jobs, as a result people looses family quality and end up hurting American economies as well, so I think there got to be a better way to settle any problems that companies encountered, such as make better products, better streamline process, quality and healthy products, and so on. My 2 cent 🙂 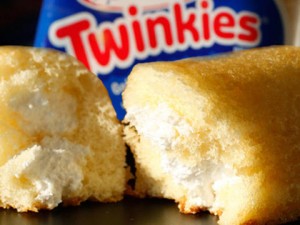