I haven’t blog about this yet as per my opinion. However today, I would like share my opinion on this. With all the technology we have, I would be so surprise that we cannot find who did the bombing in Boston Marathon a couple of days ago.

First, I would like express my condolences to all the people that got hurt and off course the 3 dead people, you did nothing wrong, merely spectators cheering for your loves one, and died for that reason. Could have this be prevented? yes possible but it would not be practical, you would have to scan everyone whom are there, even though that can be done, the bomber person could have plan this another way. So how to prevent this in a feasible and practical way? well we could have something like in North Korea, they have no violent death except their own government killing them LOL, so it’s not funny. Here is my 2 cent, with all the technology we have today, why can’t we have an x-ray machine vehicle that drive around sniffing and detecting people with weapons and bomb? I think it’s worth it to spend billions on this than spending billions on foot soldiers and the aftermath of such incident, not including the suffering of love ones and society loose faith in nation security.

Anyhow, I’m glad that with all the videos cameras include cell phone tablet and so on, I believe it is what lead to the suspected bomber and one dead 2nd one on the loose but not without a cost of one Police officer. Surprisingly these suspects were not eastern like the Taliban but who knows the Taliban might be hiring them? that’s just bull-crap, if Taliban hire them then why they have to rob 7-eleven for a few bucks of cash? so these bomber or terrorist probably act alone for other reason, I don’t think tied to mafia or anything like that, because if so why would they rob a 7-eleven for a few bucks of cash? what a joke. 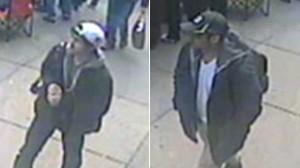