The Voice Vietnamese music show Giong Hat Viet 10. Just in case you missed it, the latest videos on TV show on September 30th 2012 Sunday. I watched it since the 1 episode, it’s not bad at all, and I can almost say that it’s probably one of the best show I ever watch from Vietnam television, it’s somewhat like foreign investment on this show, yeah, Samsung, you guess it. Anyhow, this 10th episode, there were more tears than the previous, as many say good bye to the show, the remainder will remain until they will say good bye to the show, don’t know how many will remain or if any winner or winners. I think the judges picked the correct singer for winning, however except one Tran Lap picked a girl I think didn’t sing as good as the other two the got dropped, something going on? scandal? money talk? who knows behind closed door 🙂 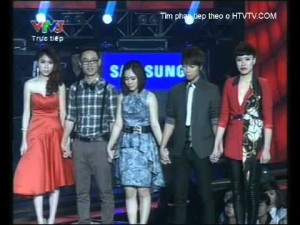