Here’s another ridiculous law in Vietnam just went into effect without prior notification to the people, if you’re riding someone else’s motorcycle and get pulled over by the police and you cannot prove that someone’s is lending it to you, you will get fine and suspicious of stealing the bike. Well, this kind of make sense, but should have been well announced ahead of time so people can prepare, the form is available to fill out that someone else is lending you the bike. So if you’re traveling to Vietnam or in Vietnam now, be careful, get a copy of this form, fill it out, just in case getting caught by the Vietnamese traffic police. Also the red light fine has risen from 300k-500k to 400k-800k vnd. So watch out. Anyhow, many people reaction was simply, this is Vietnamese style of communist government in Vietnam, this law was on the book, but wasn’t widely implemented until lately, there are list of traffic laws to be implemented, they implement easiest one first to collect money for them and the hardest law they just let it sit in the burner. 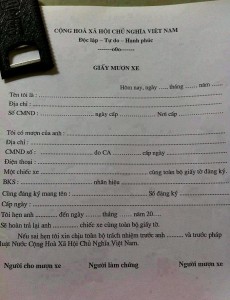 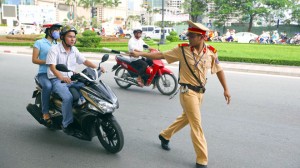