There has been new reports of people robbing others on the street day time while driving to work or riding around your motor bike. What the scam is, you’re riding your bike then someone back of you or next to you say “your bike is on fire” then you would scare either you stop immediately or just slow down and check, if you slow down and look around but see no smoke or fire, then you would move on, knowing they lied. However if you stop, and check the guy might be asking if you need help, and he will fix it for you but charging you an arm and a leg for it you can’t say no!. However if you keep on driving, some other guy set up same team will say it’s on fire later down the road, then you immediately get scare and stop, and same process took place, they fix for you and charge you big money. There are other stories where they use a child as baith to get you to a unknown place where less people and someone will hit you on the head possibly fatally and rob you, take everything you have including your bike, and it’s all because you just want to help a child, but in this case the child was use to trick you to a strange place where nobody around for you to yell for help, in this case if you’re a woman and you didn’t get raped, you’re lucky, they just robbed you. So if you’re in Vietnam out and about, you better stick with the tourist attraction area where there are securities and police and other people around you, don’t go to strange place where on one around. It’s best to go with your trusted friends family and guide tour people that don’t play game on you. Be careful when you’re in Vietnam! keep your eye open, look back and forth, don’t eat things you don’t know or source from, bring your own water, don’t bring too much cash or wear expensive jewelries and brand name clothing. 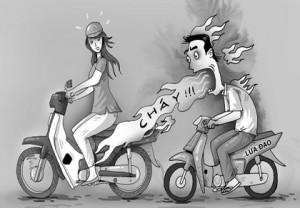 Watch more scam attempts videos in Vietnam guide for you when you travel or live in Vietnam, reactions and documentaries on youtube.