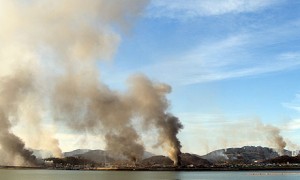 What does this mean? no communication whatsoever between the North and the South, let alone the whole world knowing what’s going on in North Korea.

South Korea must prepare for attack from the North, although we don’t know what’s going on. All ally countries including the US must support South Korea for this fight, the Peninsula between the South and North will see some aggression even possible war attack invading the South, but who know maybe North Korea wants to be left alone, since they already lost many privileges communicating and getting support from the outside world due to sanctions.

All eyes and ears gear toward North Korea. Possible attack is eminent from the North Korea.

Ally nation should prepare an atom bomb or nuclear bomb getting ready to nuke North Korea, show them who’s boss, just like how Japan being good Japan today 🙂 North Korea will change once we nuke them, and they will be as smart as Japan today LOL.