The many amazing images of Mars taken over time, real picture not enhanced or photo shop clean. So, it look like earth desert :), ok so where’s the water? How can we there and live there if there is no water? and the air, so we will need to have oxygen, can we produce oxygen on Mars? can we grow vegetable garden and produce air, maybe bring a tons of easy to grow wheat or something doesn’t died easily, and so how do we extract water? did we even find any Ice that can be melt into water yet? – how far did we dig down and where? 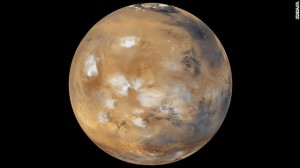 Water-ice clouds, polar ice and other geographic features can be seen in this full-disk image of Mars from 2011. NASA’s Mars Curiosity Rover touched down on the planet on August 6. Take a look at stunning photographs of Mars over the years 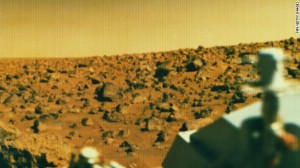 This image was captured in 1976 by Viking 2, one of two probes sent to investigate the surface of Mars for the first time. NASA’s Viking landers blazed the trail for future missions to Mars. 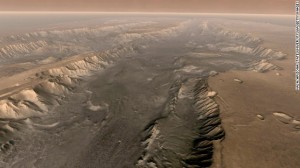 The Valles Marineris rift system on Mars is 10 times longer, five times deeper and 20 times wider than the Grand Canyon. This composite image was made aboard NASA’s Mars Odyssey spacecraft, which launched in 2001. 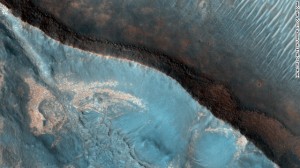 The Nili Fossae region of Mars is one of the largest exposures of clay minerals discovered by the OMEGA spectrometer on Mars Express Orbiter. This image was taken in 2007 as part of a campaign to examine more than two dozen potential landing sites for NASA’s new Mars rover, Curiosity, also known as the NASA Mars Science Laboratory. 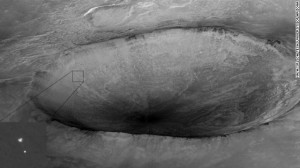 NASA’s Mars Phoenix Lander descends to the surface of Mars in May 2008. Fewer than half of the Mars missions have made successful landings. 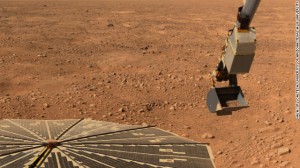 Phoenix’s robotic arm scoops up a sample on June 10, 2008, the 16th Martian day after landing. The lander’s solar panel is seen in the lower left. 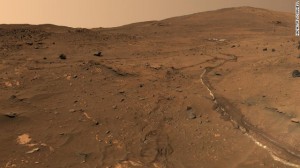 In 2006, NASA’s Mars Exploration Rover Spirit captured a 360-degree view known as the McMurdo panorama. The images were taken at the time of year when Mars is farthest from the sun and dust storms are less frequent. 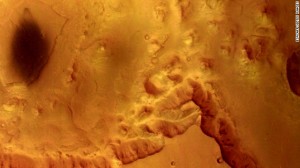 The European Space Agency’s Mars Express captured this view of Valles Marineris in 2004. The area shows mesas and cliffs as well as features that indicate erosion from flowing water. 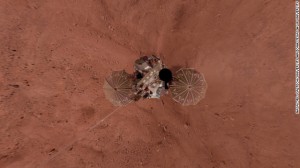 This view is a vertical projection that combines more than 500 exposures taken by Phoenix in 2008. The black circle on the spacecraft is where the camera itself is mounted. 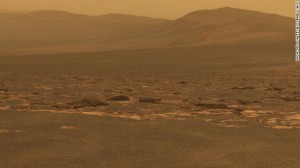 A portion of the west rim of the Endeavour Crater sweeps southward in this view from NASA’s Mars Exploration Rover Opportunity in 2011. The crater is 22 kilometers (13.7 miles) across. 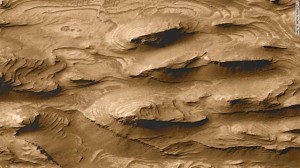 A photo captured by NASA’s Mars Global Surveyor in 2000 offers evidence that the planet may have been a land of lakes in its earliest period, with layers of Earth-like sedimentary rock that could harbor the fossils of any ancient Martian life. 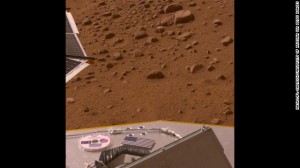 A U.S. flag and a DVD containing a message for future explorers of Mars, science fiction stories and art about the planet, and the names of 250,000 people sit on the deck of Phoenix in 2008. 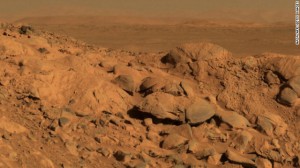 A rock outcrop dubbed Longhorn and the sweeping plains of the Gusev Crater are seen in a 2004 image taken by the Mars Exploration Rover Spirit. 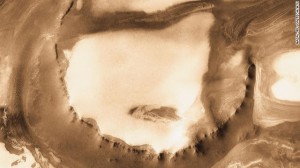 Although it is 45 kilometers (28 miles) wide, countless layers of ice and dust have all but buried the Udzha Crater on Mars. The crater lies near the edge of the northern polar cap. This image was taken by NASA’s Mars Odyssey Orbiter in 2010. 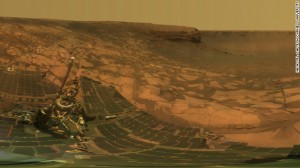 NASA’s Opportunity examines rocks inside an alcove called Duck Bay in the western portion of the Victoria Crater in 2007. 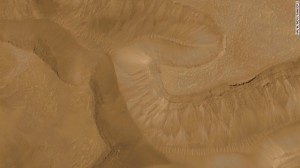 Pictured is a series of troughs and layered mesas in the Gorgonum Chaos region of Mars in 2008. This photo was taken by Mars Orbiter Camera on the Mars Global Surveyor. 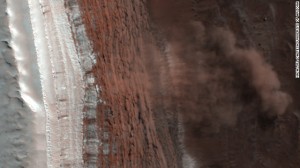 An image captured in 2008 by NASA’s Mars Reconnaissance Orbiter shows at least four Martian avalanches, or debris falls, taking place. Material, likely including fine-grained ice and dust and possibly large blocks, detached from a towering cliff and cascaded to the gentler slopes below. 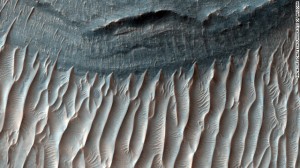 This 2008 image spans the floor of Ius Chasma’s southern trench in the western region of Valles Marineris, the solar system’s largest canyon. Ius Chasma is believed to have been shaped by a process called sapping, in which water seeped from the layers of the cliffs and evaporated before it reached the canyon floor. 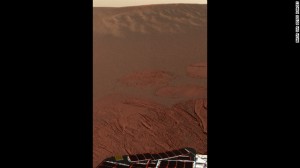 Pictured is the Martian landscape at Meridiani Planum, where the Mars Exploration Rover Opportunity successfully landed in 2004. This is one of the first images beamed back to Earth from the rover shortly after it touched down. 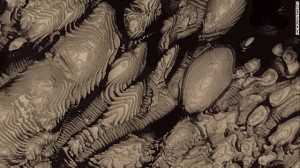 An image from the Mars Global Surveyor in 2000 shows potential evidence of massive sedimentary deposits in the western Arabia Terra impact crater on the surface of Mars. 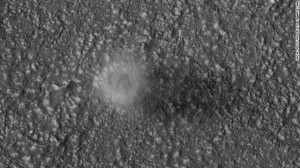 The Mars Reconnaissance Orbiter captures a dust devil blowing across the Martian surface east of the Hellas impact basin in 2007. Dust devils form when the temperature of the atmosphere near the ground is much warmer than that above. The diameter of this dust devil is about 200 meters (650 feet). 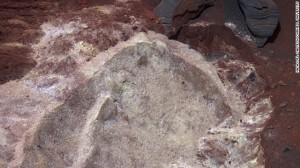 Soft soil is exposed when the wheels of NASA’s Mars Exploration Rover Spirit dig into a patch of ground dubbed Troy in 2009. 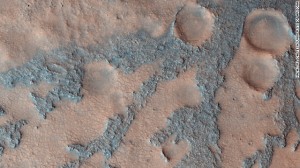 An image from NASA’s Mars Reconnaissance Orbiter shows the floor of the Antoniadi Crater in 2009. 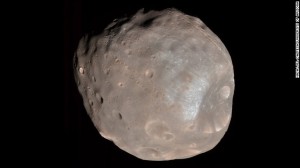 The larger of Mars’ two moons, Phobos, is seen in 2008 from the Mars Reconnaissance Orbiter. 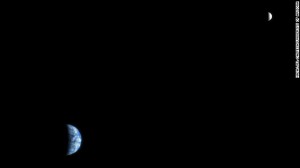 Earth and the moon are seen in 2007 from the Mars Reconnaissance Orbiter. At the time the image was taken, Earth was 142 million kilometers (88 million miles) from Mars.