Who’s the shooter at century theater aurora colorado that killed more than 12 and injured more than 50?

Police said there was no evidence of additional suspects. 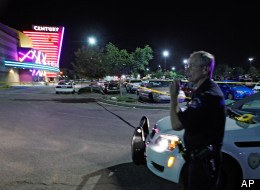