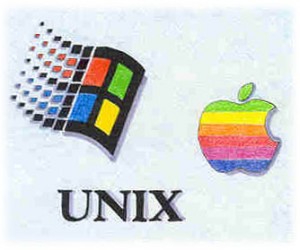 I think what happened here were Linux originally created based on UNIX, then the average people who doesn’t much about computer, find it too hard to use, because of all the command line, all typing. Then microsoft stepped in and make it better make it user friendly and a lot easy to use by changing the command prompt a  little and added some graphical user interface, GUI, in earlier days with MS DOS, it already have some GUI where you can use the mouse, then eventually full blown GUI with window 1X to 3x then to 95* and today windows 8 with the surface, meaning a design based on Apple touch screen.

I strongly believe that companies are steal each other design but in a safe manner or in a way that they already talked and negociated some kind of deal with the other companies to use part of their design, sometime the company purchased the whole company of the company so they can own it and do whatever they want with it. It’s a win win situation for everybody.

Back to the Windows operating system were based on linux, it is true, but based on unix to be exact. My own opinion on this is that, unix linux are free has been free and always will be free, developers can take the basic functionality of linux and turn it into their own operating system with the given existing unix open source. For microsoft, they took it to the next level and created more user friendly and had good plan for the future and won.

Keep in mind, unix linux existed way before Windows, so does that proves what I just say is true?