Well Butterfly Labs BFL, I think your failure made others succeeded. It’s confirmed that the USB Erupters now are ready to ship, and people are using it all over the world, and the power usage is ridiculously low, using usb power supplied by usb port from the computer. So with a usb strip of a dozens usb ports, you can have 12 of these easily. The manufacture said it’s over >300mh/s, but someone with good knowledge with cgminer was able to get it to 700mh/s and some even to 900mh/s.

What does this mean? this manufacture have these devices on hand and willing to ship even though it’s not completely tested, they only mention it’s >300mh/s, so people can tweak it to probably go higher and higher just like this guy that got it to over 900mh/s. Although it’s a little expensive, 2.1BTC each that’s about $273 each the price of a 7870 GPU or so which can mine 400_ mh/s but uses a lot more power electricity. I would recommend people get the usb erupter if they’re bitcoin mining as a business to make from their GPU, now they should sell their GPU and buy the USB erupters. Let say you have 6 7970 cards, that’s about 3000mh/s mining, sell the cars for $300 each = $1800 = 14BTC then you can get about 7 of these USB Erupters ASIC bitcoin miners. If you’re good with cgminer you can set it to mine let say average 700mh/s each = 5000mh/s total. So that a lot faster than your 6 7970 GPU in addition to electricity cost for the GPUs. So it’s a win win situation if you trade in today now. However keep in mind that the USB Erupters ASIC bitcoin mining cannot do anything else beside mining Bitcoin, it’s a piece of garage if you can no longer make money off of mining bitcoin with it.

I think this manufacture is smart, they came out with smaller, cheaper, although smaller hash rate, but it’s good to sell for anyone to use per unit, not like Butterfly Labs wrong estimate after another. 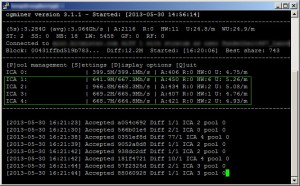 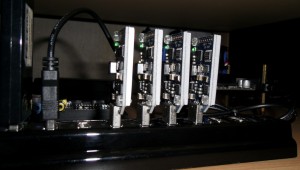