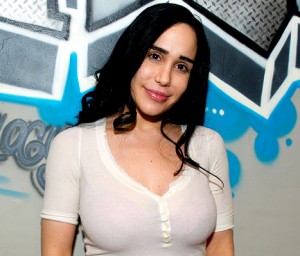 A while back there was this lady name Nadya, also known as Octomom, she gave birth to six babies, without having a father, all was through medical. She have no career and expect to be famous to get money to raise her children. This bothered many people, even her family members kind of stayed away from her, she was probably on welfare using our money to support herself and her children, or maybe not, she was broke probably, and desperate for money, thinking TV show and other media would ask her to join in a contract for TV show, well guess what? at least I haven’t seen it and don’t see it happening either, non of the babies even got on TV or was she on any known TV. Well today she is famous, famous? yes famous for taking nude pictures advertisement porn spaghettios.

Nadya has also been said to have had breast implants placed when she was 18, before she began having large amounts of children. Nadya has also been criticized for having acrylic nails and seems to take good care of her skin, having facials and possibly other procedures that a new mother usually doesn’t have time or funds for.