Happy Mid-Autum festival holiday in Vietnam Chuc Mung Le Trung Thu chuc vui ve dot den di choi. Yes today September 30th 2012 an exact day Vietnamese and Chinese celebrate Mid-Autumn festival holiday. To me, as I remember when I was young living in a country side of Vietnam in Southern Vietnam Sai Gon as we know it;  in the country side where I lived during the time, there wasn’t any street light or electricity at all, so at night it is real dark, total darkness, the only light I can remember was from burning oil lamp which is similar to a candle. During the Mid-Autumn festival the street lid up with lantern everywhere, every house, every kids light up the lantern and walk on the street singing laughing having fun, talking who has the most beautiful lantern of all, off course no price, but just fun. Some lantern are real nice, some are simple, every parents will do what they can to get their kids a lantern each, we even told each other ghost stories and scare each other in the darkness. Those days are gone, and gone forever, country side where I lived now has electricity, telephone, cell phone, and internet, and even municipal water, it is no longer what it was country side Cu Lao Tan Thoi Huyen Go Cong Tay Tinh Tien Giang, it even have a new name: Phu Dong replace Go Cong Tay. 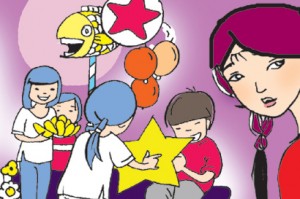