That’s right how to save money on electric bill without unplugging, in this case you plug more in LOL. OK so the trick is to get a Grid Tie Inverter, what this device does is put power back into the grid forcing the electrical grid meter at your house go backward, basically you’re making electricity selling it back to the electric company. Easy as it sound? NO not really, so the Grid Tie Inverter will do the job but it required source of power such as wind turbine, solar, etc.

The pros about this is, the power meter calculating how much electricity you use will simply freeze or go backward as you put electricity back to the grid or back to the power line for your neighbor to use. The savings will depend on how much power you put back, let say you have a 600watts GTI (grid tie inverter), and you have solar power and windturbine or whatever alternative power you have and can generate 600watts constantly, you’ll be putting back 600watts to the meter, and you save 600watts per hour money there, for instant, 600 watts can run 20 typical light bulbs 24 hours a day for a month, so by turning off 20 light bulbs 24 hours a day that’s how much you would save, equivalent to about $10 a month, that’s not bad if you ask me 🙂 but again, these kind of methods isn’t so popular because no one willing to this since power company charge pretty cheap like 7 cent to 12 cent per kilowatts hours. Unless you have serveral kilowatts solar panel or windturbine, then you can make your electric bill go down alot, however it’s either $0 or $>0 but can never be negative meaning the power company will not give you the refund or pay you for making electricity.

The Cons about this is, you need to spend hefty amount of money for the grid tie inverter and possibly solar panels and windturbine, unless you have some kind of perpetual electricity generator or a stream or something that would generate electricity out of natural resource or out of virtually nothing :). The other big problem would be if your power go out, your home won’t have electricity even if you have solar panels and windturbine because you hook up the system in a way that you sell power to the power company not producing it for your own use, so maybe have a few backup batteries (marines deep cycle) trickle charge just in case power goes out. 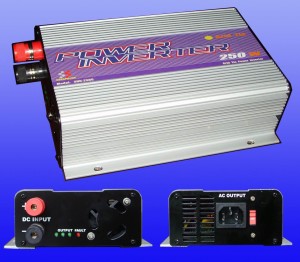 Grid Tie inverter can help you save money on electricity, see videos below from youtube.