If anyone happens to be in IRC chat room, yes IRC still existing using mIRC or web-base. Join channel like #bitcoin, #bitcoin-pricetalk and so on, you will see some discussion from the expert and the end users and others comments on Bitcoin related topics.

What I’ve been observing in the chat room is that the price of Bitcoin will continue to fall to $150 or lower in a few weeks or so. While the news in regard to Bitcoin BTC activities isn’t much, not much further development on BTC ATM machine, not much development on BTC being accepted, not much going with BTC that would lead to mainstream Bitcoin. So what causes the price of BTC Bitcoin to go down? aside from selling and buying that is. Selling would cause Bitcoin to go down, buying would makes it go up. So we know that! then what causing people to sells their Bitcoin? there isn’t any activities in the Bitcoin world that would cause people to sell?

AH huh! yes there are. A few, and I have to say, more of a speculation rather.

As more and more people realize the existent of Bitcoin, they start getting confuses before they can really understand how it work, so maybe at this stage is a learning process. Bitcoin is about 5 years old I believe, since 2008 maybe, and was at pennies per coins, risen up to over $1000 in just few years, then dropped to $500 for a while, then now at $300. The prediction is that it will fall to $150 sooner than expected and that’s where it will really stabilized.

My prediction? well yes, same, it will be at 100s and flat lined there for a very long time. However it could be at $10000 again or at 1 penny, no one know, no one can really predict accurately. 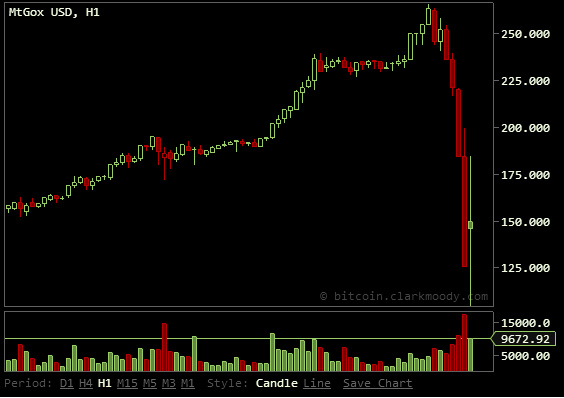