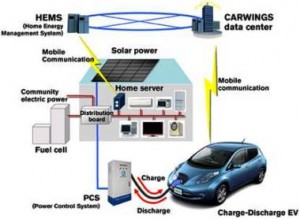 Last night, earlier in the evening, after a full day of heat wave brought temperature to the upper 100s, 110 F in some area, a thunder storm hit with rain ice wind lightning, knocked out power for a good 4 hours, all my computers server back up battery kicked in, but couldn’t hold on to 4 hours, and so it crashed. That’s the cons of having a home web server 🙂 I’m looking into a back up power system. However it’s the family priority first then the computers or toys I have :). The battery power back up system I’m thinking off is, since the gas electric generator cannot be run continuously for days or sometime even only up to 6 hours then have to turn off, I’m thinking of having a large battery bank with few inverter, the way it work would be to connect the batteries to the inverter to power the servers computers and network equipments including the fiber optics line from Verizon Fios quantum :), the a charger system that charge by house electricity that will charge just to keep the battery full but no usage until the power goes down then the backup battery module kicked in. I will use existing dual 1000 watts to keep the batteries charged every so often or whenever needed to keep it full, this way I don’t need to run the generator all day all night, just charge the battery when needed. I think the expensive piece are the batteries, but I don’t think I would need deep cycle battery, car battery might be good enough just don’t use it dry because it might not be able to charge up again :).