Well I don’t know. But what I know is I never really celebrate my own birthday nor anyone really celebrate my birthday. On facebook and other social network I even either fake my birthday or hide it 🙂 that’s just me. However for many now a day birth is special that occur one time a year, some rare people celebrate once every 2-3 years because of certain month of the year where the days doesn’t reach normally 30-31 days month calendar. Today I went to Minado Japanese Shusi restaurant buffet had some great food celebrating my wife’s uncle’s birthday, he had great successful children. 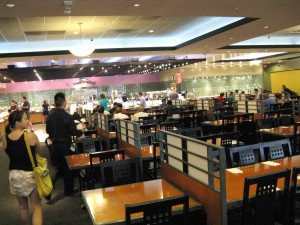 Back to birthday history, according to wikipedia, A birthday is a day or anniversary when a person celebrates his or her date of birth. Birthdays are celebrated in numerous cultures, often with a gift, party or rite of passage. Although the major religions celebrate the birth of their founders (e.g., Buddha’s Birthday), Christmas – which is celebrated widely by Christians and non-Christians alike – is the most prominent example. In contrast, certain religious groups, as is the case with Jehovah’s Witnesses, express opposition to the very idea of celebrating birthdays.[1]