Many questions raises, and yes another “gun control” related issue. This gunman has multiple magazine cartridges with him as he stormed the Los Angeles Airport. The question I have is, he has so much magazine why didn’t he keep on shooting other people around him? well apparently so far I believe that he target certain TSA officials.

I traveled for my work, and some TSA official members are jerks! no manner, no respect, they look at everyone as criminals, yes that’s right, again I say some of them not all TSA officials. So better to get this fix before more upset people will copy cat this incident. TSA official from what I see some of them being very mean! they don’t use the word please, they don’t talk politely, yeah I know they’re there to secure, but I think better training could have been enhance that. Anyhow I have not encountered any incident with the TSA folks but I can tell you that I have seen people encountered problem with the TSA, whether they get pick on to get search but it was just random or by certain things they have in their possessions.

What surprised me is that this gun man got through security check point! isn’t that something? I have been traveling for a while for work. Every time I go to check point, there are many TSA officials, some are armed, some are not, and off course there are also local POLICE officials there as well with guns. So what were these official doing letting this guy through is what I really want to know. Is it because it’s hard to get a shot or shoot the shooter with out potential injuries to others around by standers, that could be the case. Again! more training, more better armed guard with sharp shooting skill, skill that kids have playing online network shooting game could have done a better job killing the shooter. 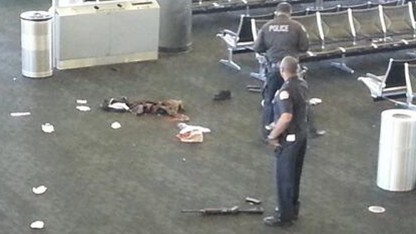