Here’s another good reason to take advantage of home schooling, and potential take on career that you can work from home, so you don’t need to leave the house and still make money and still keep up with the world, LOL, OK! so it’s not funny, sorry. Basically what happened was, the three dead appears to have relationship, the two students were one male and one female appears to be boy friend and girl friend, the suspect appears to be non-student just come the class room and knife the two students to death and immediately took his own life, so call “murder suicide”, what’s so scary about this is it happen in a class room while other students and teach were around.

So this raises some questions, why did the non-student allow to be in the class room? why aren’t other students doing anything? and where was the teacher? and my most important question of call, what is the purpose of a student ID? I think it should be worn at all time so the campus police or security known they are actually students. This killing tragic could have been prevented. What is up with security at this school, it’s not too late now to look into the the prevention, enforce all students to wear their badges, we have already worn various badges, for work, being at a convention center, visitor badge, employee badge, public service badge, staff badge, come on now! 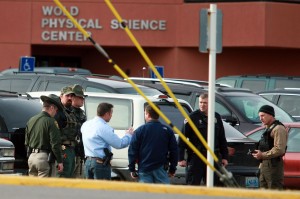 Peace be with you the two victims and the suspect may god forgives your selfishness you! I don’t know if anyone want to go into that classroom again nor the teacher want to teach there, why? ghost! ok stop!