That’s right, speed limit 85 mph for Texas state highway 130, what do I think about this? Well let start a long time ago when car can go fast the highway road was new the speed limit was 55mph, and then as the road age and car got faster and speed limit increased to 65mph, then some highway in the US such as in Utah speed limit with 80mph, now Texas beating all other states in the US and probably the world except for the autobon in Germany which had no speed limit, Texas will have the faster speed limit of 85 miles per hour in it’s state highway 130 beginning Nov. 11th 2012. To many people it’s probably doesn’t really impact them because they’re already driving that fast or faster on speed limit highway 65 per hours, I seen people all the time zoom past by me even on highway with speed limit 55 miles per hour and they’re going 80 like nothing, and yeah they didn’t get caught by cops. On the other side, high speed driving caused a lot of fatality or car accident, however if everyone is driving fast or moving with the flow of traffic and then it should be fine. 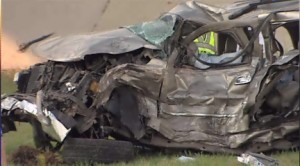