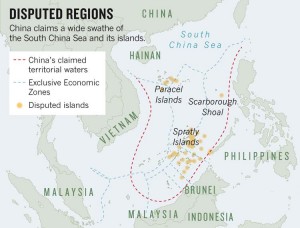 Again, lately China has been invading Vietnam water and the Vietnamese communist Vietnamese government aren’t doing anything, the people fought so hard to deter China entering Vietnam water and taking lands and have more priority than vietnamese people, and guess what? the Vietnamese government aren’t doing much to protect their land, they simply say “oh please china, don’t take our land” that’s it LOL, what a bunch of coward! However I’ve heard Vietnam are building up Naval military, Vietnam military surpass Philippines military so maybe vietnam is preparing to defend themselves from China? hahahahha what a joke, China is second largest military in the world I believe, they only loose to the US, the Soviet or Russian don’t have much military power anymore. Well look at it this way, China is big brother to Vietnam, they’re both communist, so they share stuff, share my ass!, China taken whatever they want sooner or later.