This just proof how stupid a father could be in Russia. Now Americans, don’t get any idea or get any influences by this. This father in Russia is an idiot, should take away his right being a father to his 8 years old daughter, does he even think of the consequences? what could have happened? is he retard? is he even a father? he certainly does not fit to be a father. Is he trying to make money on youtube or other video sharing network? want it to go viral so he can make a tons of money? make money any way he can even put his daughter in danger? 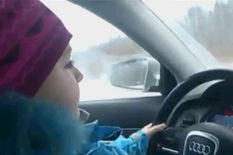