Whoever was there on that day where that man got pushed to the train track and died due to no one was helping him up, you should be a shame of yourself, you pathetic New Yorker, not all of you though, only those that were at the scene and saw that man got push down to the train track and died and you you did nothing about it, you make me sick. Especially you the camera man taking pictures keep on clicking, and your reason was? you’re not strong enough and you’re clicking the flash to warn the train conductor? give me a break you low life selfish fool. OK, now I feel better after saying my own opinions, bottom line, there could many things could have been done to help this man got pushed down to the train track, you guys could have flag the incoming train, you could have yell, you could run rush hitting the train as it approaching, many people could have rush toward the man, many people saw the argument between these two man and could have done something about it, you pathetic looser people at that seen this happens, you should get hang and died with him. Again especially you stupid camera man, are you selling your photos now to CNN and try to make a lot of money out of it? you jerk! You didn’t help this man because you’re a racist? stereotype? 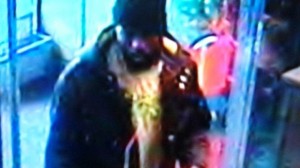 May the victim rest in peace, god be with you, and the man that pushed this man to the track get punished, even tried to change his appearance by shaving his beard, you’re not getting away fool, the victim died in vein and that man soul ghost will not leave you alone, he will hunt you down and put you down, justice being serve. I don’t believe an eye for an eye, but I do believe in punishment so that you see and understand the suffering other people you hurt. Thanks to the woman whom identified the suspect and eventually admitted in doing the crime.

See reactions from people on this incident on youtube below.