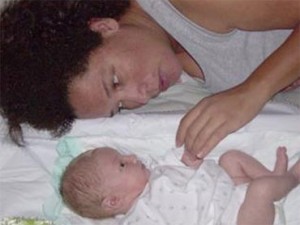 mother ate her own child after killing him 3 years old she said the devil told her to do so is she really insane or possesses?

This was back in 2009 in Texas. OK so let not jump into conclusion. I know it’s horrific and not human as so many would think. How about the fact that the mother was mentally retarded, mental illness to be exact. This is a reason everyone should stay away from mental illness people, either stay away or keep an eye on them at all time. Don’t get me wrong, I have no problem with anyone, black or white, sick or not … my point is if the person has been identified as legally retarded or have mental illness, then flag them, separate them or have someone keep an eye on them if released into society. Back to the story, it is true, evident and also confirmation from the mother, she did killed her own 3 years old and ate part of the baby brain and bite off a few toes. The mother said the devil told her to do it. She has 2 other children were not harmed in the hall way, someone found the baby and call 911. Like I said don’t jump into conclusion, know the fact, she has mental illness, but off course she will get charged with capital murder probably not death sentence but will get locked up for a long time away from society.