Loosing faith? well? A couple days ago in the USA, a Christian Baptist Church flipped over and killed some religious Baptist people. Now in Italy a Catholic church of people pilgrims according to the news involved in an accidental and killed many, look like so far 36. So sad, loosing faith? some may ask, where was god? OK stop! let’s not go there. I’m a Christian myself, a Roman Catholic to be exact! we do not talk this way, but in reality many would question where was god? why did those people have to died? Some might say, god just gather them all up and have them visit god all at once. 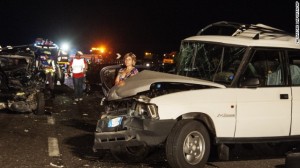 why people have to died especially after church or a full full bus of religious people such as Christian Baptist Catholic?