This was indeed bad news today, so sad, “3 dead after bus carrying teens returning to church crashes in Indianapolis” “(CNN) — A bus trip back to an Indianapolis church ended in tragedy Saturday afternoon with bloodied bodies, luggage strewn everywhere and three dead, in addition to at least 19 injured, after the vehicle flipped over.”

I used to be in the Baptist Church bus like that every week end Sunday back in the 90s, but never really encounter anything like that. However I do remember when one of the pastor preach or if he’s even a preacher maybe a preacher, he threw his fist against the roof of the bus, being real serious and mad and angry, I don’t know about that helping us much it’s like violent to me, good thing I quit after a while, I don’t know why I was involved in the first place. 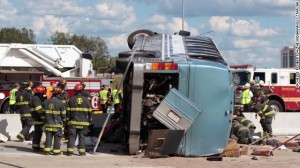