According to the chat room. It has been confirmed that if you less than $10 in your available balance for withdrawal, you will be able to withdraw payout. Higher than the $10 amount you will get red x error message saying payment cannot be done. This is once again mentioned many time that Coingeneration.com manipulated its members to the point that members have no way out, but can only make one choice in order to get paid. Although it seems like you have a choice, but the choice that get you paid more will never happens as already proven in the past!

Let take a step backward. Remember when Coingeneration.com announced that they will pay Founder Stock holder position consistently, instantly, more than enough funds toward February and March? well that never happened, Coingeneration.com stopped pay end of November, and up to today, new scam, new trick, new manipulation status, although it already happened in the past. Then Coingeneration.com released news update, so call News Released, saying that they will resume paying on January 19th 2014, mentioned that they will sell over two thousand bitcoin, that just simply lies and more lies, watch you will see that will never happen. First, no companies are buying any processing power running on thread manager it’s simply a lied, the way Coingeneration.com operates are no different than HYIP (high yield investment program), taking more from another investors and paying other investors,  they kept certain amount of money for themselves, such as buying Bitcoin, gambling, more scamming projects and so on, and if they profit they may bring that money back and give it to the members, but most likely not. I can tell you now that if I have over two thousands bitcoin, I would spread and sell it and make a good living out of it, instead of this headache complaint from >90% of members. Simply lies, make up stories to motivate members.

So back to the payment. So we know that coming January 19th, 2014, we will get no payout, don’t put too much hope on the January 19th date that payout will happens. As you can see already proven, Coingeneration.com already started a new scam methods not to pay you fully. Only members that have less than $10 in their available balance for withdrawal will be able to withdraw, more than $10 you will get a RED X error message payout cannot be done and don’t expect it will work on January the 19th. What this scam or fraud method does is, it manipulated the members to have no real choice in order to get paid is to trash all the money they have and only keep $10 balance in order to get paid $10, this is the only real choice members have. Once again, January 19th coming, most likely, this is what will happens, – it will get delayed further to whatever reason they will come up with a good reasons – or they will pay certain amount to certain members, maybe selective group of people to continue to motivate more investors – or they will come up with new strategy. The sad thing about this is, nothing anyone can do about it, your complaint will be ignored, coingeneration answered questions that they want to answer, and the chat room supporters are blind in the dark like its members, they may know just a little bit more, that’s about it, but not fully. 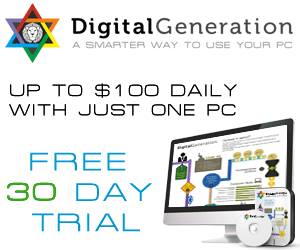 coingeneration.com digitalgeneration dg cg scam forcing its members to reinvest no pay out possible for > $10 balance