I just read a hot article posted today on tuoitre online news paper. Although I heard about the problem Vietnam have with corruption but that’s at the communist government level, but now the street robbery increased at an alarming rate and the people are asking for help, some even afraid to go out on the street due to the robbery in day light. I think the local police should set up a campaign to catch these criminals, the trends already indicate the locations where it happen, so all the police need is to lure the criminals into robbing and catch them, although it sound simple to me but I’m not sure if the police will be doing that or already had it set up.

It doesn’t matter if you’re a tourist or local resident there in Vietnam, just watch out! a few common sense to protect prevent yourself in getting into these kind of scenarios such as don’t wear jewelry or look rich and fancy, just be plain, small wallet and a cheap cell phone you will have more fun then wearing showing off a tons of jewelry and fancy electronics gadgets such as laptop and smart phone will get you into trouble, you’re asking for trouble, stay away from trouble, even if you’re a smart big muscular guy think you can catch those crooks and beat them up, dont! they will chop of your hand if they have to!

I don’t think it’s hard to catch these thieves, there are trends that can determine the locations and time, off course these street robbery are well planned and organized with many people involved from setting up the scene to a group of gangster will do what it take to rob a big one! So be safe, don’t show off your jewelry or wealth, don’t go to places that have no police or little people around, yell for help as need don’t worry if you cry like a baby, it will at least deter the thieves away. Vietnamese people there most of the time will beat up the thieves to death, many thieves had died that way, so just yell thieves if you need to 🙂 be safe and have fun 🙂 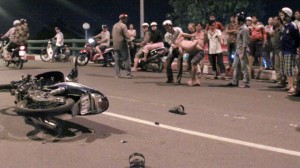