I hope nobody is falling for this trick again from coingeneration.com. Many members had been on this road before. See good news, great news, awesome news, looks promising, and in the end it was just a trick to get you motivated and give coingeneration.com money. Coingeneration.com clearly indicated this on their news released today “nor are we trying to make you do anything.” You see that statement? That is it, it’s proof and they admitted that they’re using their intelligent to scam you, you fell for it, it’s your fault! not their fault. You invested money, you didn’t get it back, not their fault, it’s your fault, you fell for the scam.

Unfortunately, this is how advance HYIP work, first they brings good news to get people involve and invest, people get paid consistently and instantly. Then coingeneration.com brings even better news to attract more new victims and motivate existing members, and as investment grew, people keep on giving coingeneration.com money, coingeneration.com noticed big amount of money and start to withdraw it to bank account and cash out, at the same time killing time by updating news and as needed gives fake make stories reasons taking advantage of existing problems to make it real so people would believe. Even if you don’t believe in the stories, there isn’t anything you can do, cannot complaint to anyone because you fall into coingeneration.com trap!

Now let’s talk about the pictures on coingeneration.com Many already know coingeneration.com famous for stealing images on the internet and use adobe photoshop to modified it and make it as their own, this has been proven in all occasions, all the pictures of offices and buildings are stock photos edited. The virtual office however is real just like a PO box for $5 to $10 a month rental, there isn’t anyone there, just a virtual address on the internet that cost $5 to $10 a month anyone can get one. The latest pictures of the Bitcoin machine that said BTC-O-MATIC don’t believe too much into it. Bitcoin ATM machine is real but not readily popular available. Coingeneration.com just take advantage of bitcoin and use it to scam victims, I hope no one spend actual money on buy this fake btc-o-matic bitcoin machine yet. Let think about the image posted on members homepage of the btc-o-matic bitcoin machine. Do you question why no body around in the picture? who’s using that bitcoin machine? what kind of retail store or coffee shop is that? it is so lame! but again unfortunately people are falling for this. 100 people see it, 50% would questions. 25% would say scam, the other 25% will probably fall for this scam. That is all coingeneration.com need the 25% of the people will give them free money, stealing the money to be exact!

Finally let talk about the logo. OK so the old logo five stars doesn’t look so good, insulting other religion. Being insulted with the five stars religion. CoinGeneration.com decided to change the logo to a water drop or also a standard stock photo, takes 1 minute to create or steal on in the internet.

Last but not least, the name DigitalGeneration changed to CoinGeneration, very simple to understand. There’s a real company name Digital Generation based in Texas USA, and again no doubt they got insulted, and as result was force to change.

Message: Look here, today they launched a new version of thread manager for Windows and Mac. Also as they promised there is already a new logo on their website. Same Pat, different hat.

We are finishing off updating the system and we recommend that you install our latest software (version 3.3) whether you are using Windows or Apple. In addition to these versions, there is also an Android app available. Please note that mobile payouts are calculated separately from Windows/Apple and require a separate account. The mobile version of our website is currently under construction: we hope you will enjoy using it and managing your back office on your mobile within the next few days.

Our primary objective, that is, our common objective, is to restore the company’s reputation and ensure stable operation. So far, our experience suggests we have been unilaterally doing our best to perk up the system and, taking the degree of your cooperation into account, we reserve the right to lift or lower your limits depending on your account’s affiliate activity status. We have been more than loyal to all our members from the new year, but despite our expectations, the sea change did not happen. Just to make things clear, we are in no way attempting to blame you for not wanting to help us, nor are we trying to make you do anything. None of us were born yesterday, and future scenarios must be self-evident to everyone.

It is easier to destroy than to create: we have come a long way, and now forward is the only direction. Updating and supporting the app on other platforms seems pointless if the attitude persists. To break the stereotype associated with our logo, we have decided to take the matter in our hands and refresh the company’s image as early as this week.

And finally, we would like to remind you that BTC-O-MATIC terminal quotas for our shareholders are to be re-introduced in May. So if you want to buy a terminal right now, see you in Amsterdam or Slovenia: we have plenty of machines available! And, by the way, Amsterdam loves our terminal. 😉 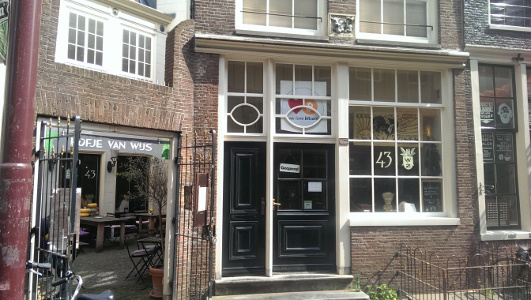