So it took the killing of over 20 school children by guns to take a look at gun control again? F*CK you whoever bare arms guns american! you are all crazy people, I’m an american and I don’t bear arm, although I live in a diverse area with violent, let the police and other authorities do their, all you need is cell phone, and some training on how to protect yourself without baring arm.

You make me sick and I’m sure other people in america have same feeling, especially you idiot ass-hole youtube guy make a video of yourself caring gun in daylight walking around and argue with the police with your camera rolling telling the police you have the right to bare arm arm and police can’t do anything about, you are a dick and a future killers just like what just happened in Sandy Hook Elementary school, it’s people like you that did this and you’re backing the right to bear arm so later in the future you can kill someone and maybe many other people! how would you like it if I carry a gun walking around your neck of the wood, punk ass stupid ass-hole.

Ok enough with that person on youtube think he’s above the law. Back to the real issue, gun control. You know I came from a communist nation, I left because communist don’t operate in a way I can trust, but what I admire about the communist and probably the only thing they did right is, no gun to anyone! no such thing as right to bear arm in a communist nation such as Vietnam and China, authorities or police saw you with a gun yeah they will run away but flag you down and capture you and you will be be-headed! communist nation, you will be be-headed – if you sell cocaine – if you bring cocaine into their country – if you kill someone else – Well enough of the communist, it’s the only thing I see they did right! NO GUN to any of their citizens. Back to America, the right to bear arm, I’m sure many US people with guns would say, guns don’t kill people, people kill people! CUT the F*CKing crap! yeah yeah! blah blah, if that kids don’t get guns he will find ways to kill those faculties and student at Sandy Hook school, yeah yeah! F U right to bear arm freak! you are the future murderer. You should take a look at yourself and think, why do you need the gun? owning a gun is waiting to use it on someone, or waiting for a devil to come out of you to harm people whom ticked you off by just looking at without saying hi, yes you kill someone for just staring at you, you kill someone whom did nothing but just being there as a bystander!

So it took this killings of many school children ages 8-10 in just a few seconds to a minute massive gun shot like video games or movies, for us to take a look at gun control again! and you know what? you can say that we’re taking advantage of this and we might win this time if we use this Sandy Hook Elementary school shooting, and the people’s falling heart and soul would definitely sign to ban, but we leave it aged too long, it will get dropped off the table again. So need quick action NOW! do it NOW! ban all the right to bear arm, ban all guns, I understand that people will find other ways to kill others, but it will be harder, and no massive shooting like this. Anyone whom possess a gun or guns or other weapons that can kill massive people quickly, I hope that you think hard, think about children, could be son daughters grand son grand daughter your friend’s son daughter children that you might came across and love! do something about the weapons you have! America have good police force, they will respond to 911 call quick! I will install a security camera system  at your house free if you give up your firearm weapons! 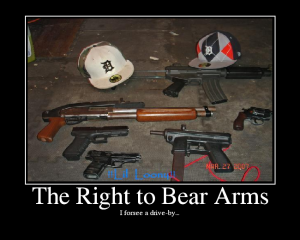