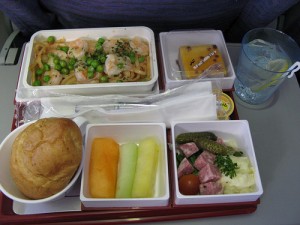 The risk of eating airplane food or food prepared by unknown people. How about finding hair in your air plane flight food? worst! a needle, yes that what happen with Delta Airline flight, passengers bite into a sandwich that have a needle, one was injured, three others found it before biting into it. So be careful travelers, instead of having a nice vacation on the beach, it could cause you your life or serious injury for the rest of you life.

MINNEAPOLIS — Delta Air Lines Inc. is trying to figure out how needles got into turkey sandwiches on four flights from Amsterdam to the U.S.
The airline says needles were found in six sandwiches on four flights on Sunday. Delta spokeswoman Kristin Baur says one passenger on a flight to Minneapolis was injured, but the passenger declined to get medical attention.
The sandwiches were prepared in the kitchen of a catering company in Amsterdam, and some were served to business class passengers on Delta flights. After the needles were found, passengers got pizza instead.
Delta says security for its meal production has been increased and it is using more prepackaged food while the investigation continues. The needles were found on flights to Minneapolis, Atlanta and Seattle.